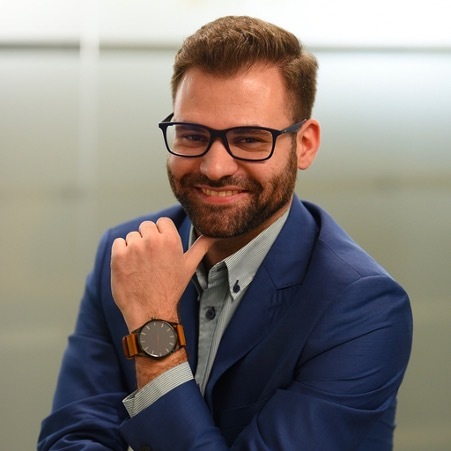 On a daily basis, Paweł works as a Tech Lead in Data Management for Retail & HR squad. He started work in Grand Parade 1.5 year ago on the very beginning of Smart Data Platform initiative.

Paweł says:  I’m definitely not a book eater, however, I like to read, especially during holidays and travelling. Luckily, my wife gathered a quite nice library, so I’m constantly encouraged by her to read :) In my free time, I love to play board games (the more complicated the better) and cook.

The story was written by a senior British Army officer and NATO general. The book suggests that Russia could easily invade the Baltic States, that war between Russia and NATO would be possible. I read it in 2017 when the conflict on Ukraine escalated. The very interesting analysis presented in the book causes us to think that war is not only the history of our generation.

It’s a debut novel of Camilla, the first part of crime series. I liked it, because each next book is about another dark history with action in the same city, but also develop a story of the main characters. It is quite light literature to read however it still a criminal :)

One of my favourite fantasy series. I believe everybody knows who is the Witcher. The best thing in that novel in my opinion is the way how the author shows society problems like no tolerance, prejudices. Multiple threads and adventures of Geralt – there is everything, which each fantasy fan likes.

A very nice post-apocalyptic novel (consists of 3 parts). When you read it, you feel anxiety, like you were watching a horror movie. The book is full of descriptions of darkness, problems with social relationships and… people living in hope, that situation will change for better in future.

One of my favourite books with Dr Langdon’s adventures. The mystery, which Robert is trying to solve, is full of puzzles. Moreover, the action is starting very soon from the beginning including a lot of twists. It causes an issue - you want to read more and more to know how it ends :)

In this series, we ask our William Hill colleagues to share their favourite book recommendations and tell us what specifically they learned from them. Today we present 5 recommendations from Kseniia Koltsova. Enjoy a good read!

In this series, we ask our William Hill colleagues to share their favourite book recommendations and tell us what specifically they learned from them. Today we present five recommendations from Dorota Tworkowska.